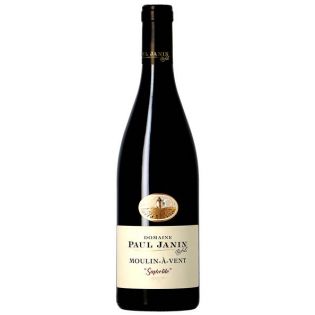 This AOC red wine takes its name from an authentic windmill, classified as a historical monument, whose restored wings still turn in the heart of the vineyards. In the east of France, it is produced in the north of the Beaujolais vineyards, where the 10 crus of this region are concentrated and of which the Moulin-à-vent appellation is part. It is spread over the communes of Chénas in the Rhône and Romanèche-Thorins in Saône-et-Loire. The moulin-à-vent expresses all the qualities of its grape variety, the black gamay with white juice, the vines having found here a climate and soils particularly adapted to their culture. The winegrowers continue to improve the quality of the wine year after year, helping to make the Moulin-à-vent one of the finest crus in the Beaujolais.

General presentation of the moulin-à-vent

The Moulin-à-Vent appellation is one of the 10 crus of the Beaujolais. It is adjacent to the AOC Chénas to the north and the AOC Fleurie to the south-west. The vineyard is located to the east of Beaujeu, on the border between the Rhône and Saône-et-Loire.

As in the rest of Beaujolais, where red wines dominate, the AOC moulin-à-vent uses exclusively the region's flagship grape variety, Gamay. However, a few accessory grape varieties are authorised, up to a limit of 15%: melon, chardonnay and aligoté.

With the AOC brouilly and côte-de-brouilly, the appellation moulin-à-vent is the only Beaujolais cru not to bear the name of the commune which is at its origin. It is indeed from an authentic grain mill that this wine takes its name. This historic monument is, as it should be, the emblem of this remarkable vineyard.

Characteristics of the windmill

The Moulin-à-vent AOC has several characteristics specific to Gamay, a grape variety that finds here soils and a climate favourable to its cultivation. The wine's colour is an intense purplish red, sometimes evoking dark garnet, sometimes deep ruby. When young, the aromatic palette is dominated by violet and ripe cherry. It becomes more complex with age and is enriched by aromas of iris, faded rose and ripe fruit. They then evolve towards truffles, venison, musk and ambergris.

The red wines of the Moulin-à-vent appellation are tannic and fleshy in the mouth, full-bodied and fine at the same time. They have a good length, are velvety and delicately spicy. These are wines with good ageing potential. On average, a Moulin-à-vent AOC can be kept for 5 to 10 years. The best vintages can easily be aged for 15 years or more.

How to taste a Moulin-à-vent

After having worked alongside the greatest Burgundian names (Jean-Yves Bizot, Christophe Perrot-Minot, Arnaud Ente...) Fabien Duperray decided to bring out his own work by creating the Domaine Jules Desjourneys, in homage to and with the vision of the pioneer of natural wine Jules Chauvet. The wines are immediately impressive in their class, depth and breed, thanks to the titanic work carried out in the vineyard and the cellar. We had never seen wines of such density in Beaujolais in this stunningly aesthetic style...

"Mee Godard created his estate in February 2013 (...). This small estate of 5.40ha is composed of beautiful terroirs of the Morgon cru, and very old vines (Corcelette, Grand Cras, Côte du Py). We are impressed by the dimension of the wines after only three years of harvesting. (...) The 2016s are limpid, the maturity is expressed differently with fresher and less candied fruit. The mouths are more stretched out and less immediate; the acidities bring a lot of dynamism. Grand Cras has changed its style: it seems less extracted and more Burgundian than the 2015. The Côte du Py is superb. Its fruit expresses blackcurrant and blackberry with a graphite imprint that tightens it." RVF Guide 2018

The reference for Moulin-à-Vent...